This is a truly amazing Tim Ferriss podcast with guest Derek Sivers, founder of CD Baby. This was recommended and shared on Twitter several times before I actually listened to it. At 2 hours and 7 minutes, it’s the longest podcast I’ve ever listened to, but it’s most certainly worth it. I’ve listened to it in full another two times since. Below, I note some of the highlights and attempt to extract the key takeaways.

“I think that you are whatever you pretend to be. I think I just realized somewhere in there that you can just choose to be confident.”

I love this simple point. Confidence is not so much a personality trait as it is a mindset. Each of us has the ability to be shy as much as we have the ability to be confident. Of course, we can access this with various degrees of ease, but the point remains the same, we are all capable of being confident.

Takeaway - Confidence is a mindset. Activate it, be confident.

“And Kimo Williams told the story to my family, he said ‘you know, I tell people all the time, I get all these kids that want to be famous, and I say show up at my studio at 9 AM. Nobody ever does. Nobody has their shit together to show up when I tell them to. So I had honestly forgotten that there was this kid that called from a classified ad.”

I recently wrote about showing up on Saturday. Half the battle is showing up. In order to learn and improve, you need to first be there and be present and engaged.

Takeaway - To learn, you need to first be present, be engaged and be ready for it. Show up.

The standard pace if for chumps

“He said the standard pace is for chumps. The school has to organize its curricula around the lowest common denominator, so that almost nobody is left out. So they have to slow down so that everybody can catch up. But he said “you’re smarter than that. Anybody can be smarter than that if they wanted to be. So you can go as fast as you want.”

This is an excellent point. This applies in school, but also in life too. In any career, entrepreneurial path or other endeavour (say learning an instrument) there is a sequence of steps you need to follow to become good. But how you attack these steps and the pace at which you go through them can vary. Rytis, the co-founder of YPlan (the first business I worked for), said something similar to me: “you can’t skip from A to Z, but you can move from A to B to C to D as quickly as possible”.

Derek shares more on this story on his excellent blog.

Takeaway - When learning a new skills, be deliberate and strategic in your practice to get ahead of the curve.

I have internalised this as an example of the Pareto principle. Simply put, the Pareto principle suggests that for many events, roughly 80% of the effects come from 20% of the causes. That is to say for many lessons, we can extract a disproportionate amount of value from the early part of the work. The last 2, 3 or 4% take significant effort but with disproportionally less reward.

You can see Derek’s full post on that here.

Takeaway - Work hard to make an impact, but understand that the return diminishes over time. Don’t stress too much over the last few percent.

Hell yeah, or no

“Because most of us say yes to too much stuff, and then we let these little mediocre things fill our lives. So the problem is when that occasional big oh-my-god-hell-yeah thing comes along, you don’t have enough time to give it the attention that you should because you said yes to too much other little half-ass kind of stuff, right?” 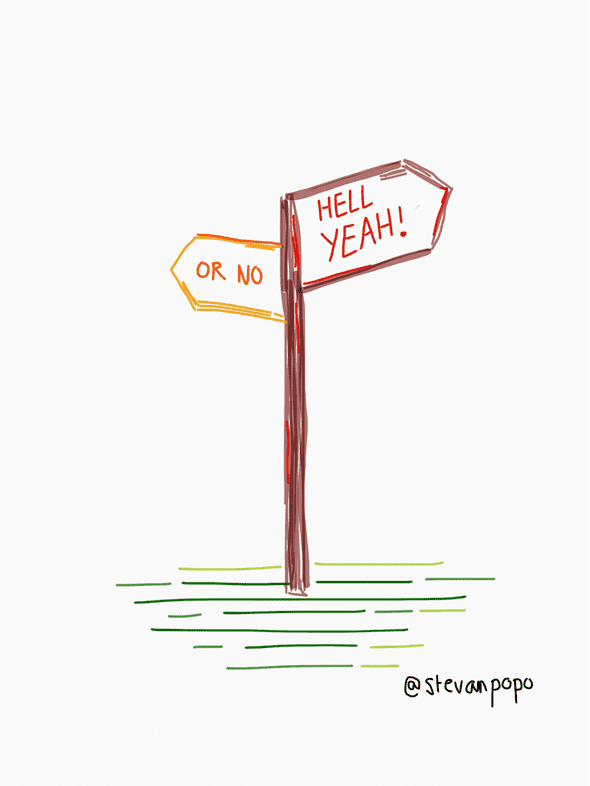 Perhaps the best advice of the podcast and it relates to time management. This hit me at a perfect time as I had recently decided that I need to say no more often. I think Derek’s phrase “hell yeah, or no” perfectly encapsulates the way we should think about our time. Time is perhaps our most valuable resource, so we shouldn’t fill it with mediocre things or things we are only a little bit excited for. We should either be really excited about it (“Hell yeah”) or if not, save that time for something more exciting (“no”).

In some ways, this is counter intuitive. My inclination was to assume that the most successful people generally keep themselves very busy. But look at this post from Jason Fried, founder of Basecamp. He keeps his calendar open and clear, so that he can take advantage of time as new things come up: “This lets me make the best use of my time when I know how I want to use that time. When’s that? At that exact moment.”

Rob Fitzpatrick refers to a similar idea in his post Surplus Time in reference to Mark Cuban’s investing strategy: “Mark Cuban suggests sitting on a large pile of cash and accepting that you’re going to lose some each year. The reasoning is that even very super-rich folks have trouble getting their hands on lots of cash in a hurry, so having it sitting around means you can pounce on limited-time deals noone else can pursue…By trying to ensure every dollar does its job in the short term, you end up doing less well in the long. Adding some slack (ie. intentional inefficiency) into the system ends up giving better results”.

More on Derek’s “Hell yeah, or no” thinking here.

Takeaway - Say no to things that don’t really excite you. This will enable you to go all in on things that are exciting.

“And yeah, that’s what I did for every single thing that ever came my way, I would gather everybody around, explain the philosophy behind that why we do things this way, why I’m about to say what I’m about to say and here is what I think you should do, do you understand why? Now please write it down. But it was also important that I thought that to multiple people, not just one and had them write it down. And then the cool thing is, I wasn’t doing the hiring anymore. I had taught other people how to do the hiring. So soon my employees were doing the hiring and then they were teaching the new people how to do this thing from the book.”

This is an important nod toward management and culture. At some point in a company, you can’t do everything. You need to become the teacher who enables others to do those things. This means teaching your employees your philosophy and giving them a framework to make decisions or act within. It also means fully understanding the frameworks you make decisions by yourself.

Takeaway - Understand the frameworks by which you make decisions. Teach these to people you manage/employ.

“So what I started doing in 2007 is every book I read, I would keep the pen in hand and I would underline my favorite sentences, circle my favorite paragraphs, write notes in the margins and then after I was done reading the book I would put aside two hours to open up a blank text file and type out everything into a plain text file. Knowing that plain text files are among the most permanent, long-lasting format, they will work on everything, you can read them on phones or new devices we haven’t even thought of yet will always be able to read plain text files. So I started doing this for every book I read, and then I would review my notes later.”

Nothing new here, but a really important habit. It’s easy to read books passively; finding points of interest but failing to turn them into actions. Taking notes makes reading more passive and helps us retain the information. It also allows us to review at a later date and hopefully turn into actions.

Which brings about the next point…

I love this point. I’ve often read books and thought there were one or two good takeaways, but that it was way too long. Turning books into directives is a nice way to keep things actionable. When you review, you don’t need to re-read the whole thing, just the directives (and maybe the notes).

Takeaway - Turn books (and other resources) into directives. Always have takeaways. (Which is why I’m including these takeaways - meta).

“Gabrielle Reece, who was on this podcast with Laird Hamilton, both very famous athletes and they’re married, and she said “go first.” And all she meant by that was, during your day, be first. Be the first to look at someone and smile, be the first when you walk up to the barista, asked them how they’re doing. Be the first to initiate that. And it’s such a simple way to put a smile on people’s faces, not always, but a good portion of the time and that can change your own state.”

This is related to confidence, but another excellent point. Going first can ease tension in situations and show a willingness and enthusiasm that people like.

Don’t be a donkey

“Well, I meet a lot of 30-year-olds that are trying to pursue many different directions at once. But not making progress in any, right? Or they get frustrated that the world wants them to pick one thing, because they want to do them all, and I gets a lot of this frustration like “but I want to do this AND that AND this AND that, why do I have to choose? I don’t know what to choose?” true.

So what I mean about don’t be a donkey is, you’ve probably heard the fable about Buridan’s donkey. It’s a fable about a donkey that is standing halfway in between the pile of hay and a bucket of water. And he just keeps looking left to the hay or right to the water, trying to decide hay or water, hay or water, he’s unable to decide. So he eventually falls over and dies of both hunger and thirst.

So the point is that a donkey can’t think of the future. If he did, he’d clearly realize that she could just go first drink the water and then go eat the hay.

So my advice to my 30 year old self is don’t be a donkey. You can do everything you want to do, you just need foresight and patience.” 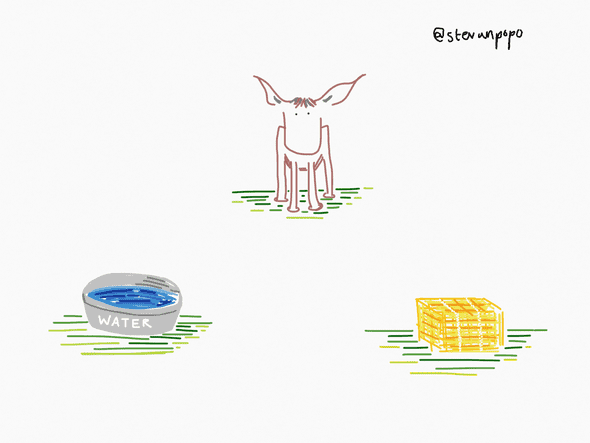 This was really pertinent to me. It brings together two concepts that at times can feel in opposition; ambition and patience. As an ambitious person, I often want to get things done quickly. Remember the earlier point, the standard pace is for chumps. But at the same time, some thing do take time. They require patience. We often over estimate what we can do in the short term and under estimate what we can achieve in the long term. Derek’s advice to have foresight is wise in this respect.

Takeaway - Plan ahead and be patient. Life is long; you can do a lot if you have the foresight to act on it each day.

This podcast was full of takeaways and interesting points, perhaps more so than any other podcast I’ve listened to. I can only thanks Tim Ferriss and Derek Sivers for taking the time to share this.