Nathan Barry, a successful entrepreneur and designer, recently shared The Ladders of Wealth Creation, describing a framework to generate wealth. The framework also provides a useful way to think about career decisions.

I recommend you read the post in full, its worth it. But as a summary, he argues that creating wealth is a skill that can be learned. He uses a metaphor of ladders, that you can both climb up and move across in order to create more wealth. 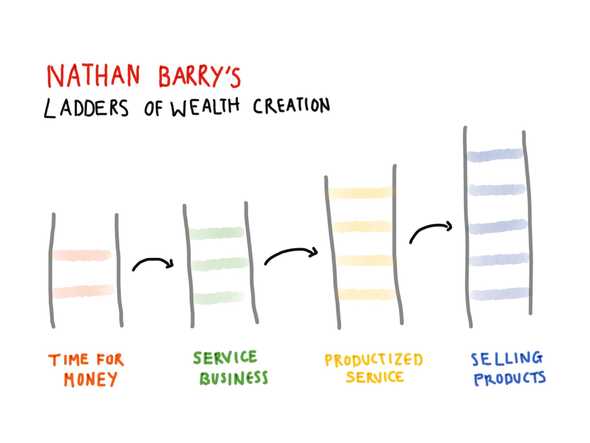 Let’s consider how this relates to career decisions, in particular, which career to pursue.

As a thought experiment, you may ask yourself - how well does career path X lead to moving between the wealth ladders?

Let’s view a few career paths through the lens of Wealth Ladders.

I started my career working in technology sales. I had a salaried position at a venture-backed startup. This would be considered ladder 1 in Nathan’s framework.

However, the jump to ladder 2 or 3 is not obvious. Contracted roles as sales people are not common. Nor do I know of many specialized sales agencies, etc.

In ladder 4, selling products, sales is obviously a major part. In many cases, you’ll see co-founder partnerships where one focuses on product/technology and the other on sales/business.

Now of course, sales is a very valuable skill, used across each of the ladders. It’s just that transitioning through the ladders is non-obvious. Making the leap from ladder 1 to 4 is possible, but challenging.

In addition, contracting and short term work is very common (ladder 2). It’s also common to see someone grow from a contractor into an agency or consulting type arrangement (ladder 2/ladder 3).

Finally, a software developer can create their own products and charge people for them (ladder 4).

And finally, a non-technology example. My friend is a plumber. He started his career working as a salaried employee for a large maintenance firm (ladder 1).

After 5 years learning his trade, he partnered with another plumber and set up their own small firm, pricing their work on an hourly basis (ladder 2). This is a fairly common move in the industry.

With time, they’ve earned bigger contracts and plan to begin working on their own developments, saving money to develop small properties and rent them out (ladder 4).

Plotting a jump to ladder 3 and ladder 4 can be quite specific to an idea, skill set or individual, so I can’t propose any rules there.

However, I think there is a common characteristic of careers that make for a straightforward first jump from ladder 1 to ladder 2; if you left your salaried job today, you could immediately look for work with your primary skill set in a contract capacity tomorrow. This is true for software developers, designers and marketers as well as personal trainers, plumbers, electricians, etc.

These jobs are typically associated with a specific task. You might even consider them a craft.

A particularly good heuristic is if an online marketplace already exists with demand for your specific craft (think Upwork for developers and designers or CheckATrade for plumbers and electricians).

The point is, different career paths have different routes between these Wealth Ladders. It’s useful to consider at the outset how you might jump from ladder to ladder.

Of course, careers for any individual are unique and it’s a topic that should be treated with nuance. But my feeling is that some careers have routes between these wealth ladders which are well explored and clear. Finding these paths of least resistance may be one way to a wealthier life.