What do Dispatch, an American Indie-roots band from the East Coast, and successful startups have in common? The answer is 1,000 true fans.

I first became a fan of Dispatch in 2011. I was working at a summer camp in Connecticut, America. Our music specialist used to play one of their songs, ‘The General’, on guitar. I heard the song and liked it right away. I then followed them on Spotify and entered the rabbit hole of albums and EPs that goes back to 1996.

Here is a video of Dispatch playing ‘The General’ live in Jersey in 2012:

I hope you noticed a few things about this video:

The point is that being successful and being mainstream is not the same thing. In other words, having some people that love you is different to having a lot of people that like you.

Kevin Kelly has a great article called 1,000 true fans. In Kevin’s own words:

He goes on to define a ‘true fan’ as someone who will buy anything you produce. The number 1,000 itself isn’t important, but rather a signal of magnitude. The takeaway is that one way to be successful is to do something that a few people really, really love, rather than something that loads of people sort of like. This is true for both musicians and startups.

Creators can often get caught in the appeal of ‘mass market’. An ambitious entrepreneur wants everyone to be their customer. This can be the case in writing a book, building a YouTube channel or starting a company.

The startup world echoes this sentiment:

Aiming For An Encore

The reason why Dispatch is successful is that of the fans they do have, the fans adore them. They leave youtube comments admiring ‘one of the best around’1. 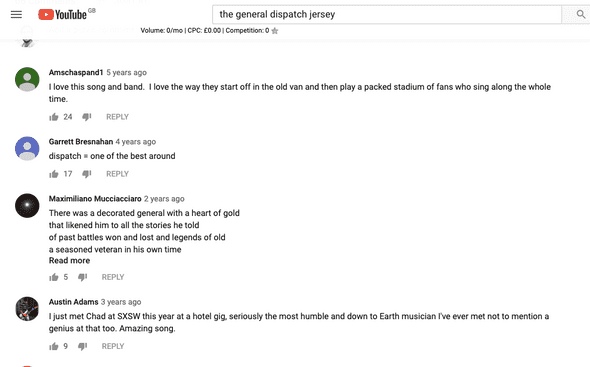 They volunteer (for free) at their gigs to help support the show. Their fans even buy tickets to their latest gig whilst 2,000m above land on a gondola in France (that was me)2.

When starting a project, it is worth asking yourself who are the 1,000 fans you are aiming for. And what would it take to make them scream for an encore? (Or another post, book or product3). This was the startup lesson that Dispatch reminded me of, as I screamed for an encore with 1,000 other fans last week (below).