This is a good book digging into four of the most important companies ever (Amazon, Apple, Facebook, Google).

There is a huge amount of useful data here and the book reads in an easy style. Scott is controversial in good amounts, although he has a clear side of the argument which comes through in his writing (anti-Four). Acts as a good call-to-arms to view these companies with greater scrutiny given their influence.

View on Amazon here: The Four: The Hidden DNA of Amazon, Apple, Facebook and Google

The Four (Amazon, Apple, Google, Facebook) are in a race to be the first trillion dollar company. Between them, they map the world, create thousands of jobs, create a huge amount of stockholder value and build personal supercomputers. But they also avoid tax, leak personal data and make some markets anti-competitive. Large incumbents don’t know how to react to them and smaller startups are often killed or acquired. They only really fear each other and are beginning to compete with each other in a number of ways.

Amazon has become one of the biggest brands in the world. 51% of US households have a prime account. But how has it become so popular?

It appeals to our evolutionary human nature to have more stuff

In the past, as hunter-gatherers we would stockpile foods in order to avoid shortage. This made sense then as food could be difficult to come across1. Now our access to goods is much higher but those innate desires remain the same. In a world driven by consumerism, Amazon has thrived as our means to get hold of any product.

Amazon has been able to raise huge amounts of patient capital

Amazon went for years without making a profit. Jeff Bezos has been able to sell a huge vision on the company that is based on future growth rather than current profits.

In stock markets, most retail brands trade at 8X revenue multiple but Amazon trades at 40X. This abundance of capital allows them to take risks (e.g. research into floating oceanic warehouses). It also allows Amazon to make expensive investments in areas that provide a moat to competitors (e.g. building large warehouses armed with robotics).

Amazon has also been able to use retail (low margin business) to navigate into other more profitable businesses. For example, Amazon AWS provides cloud services and is a huge business in its own right2.

They have also developed retail stores in order to sell phones, tablets and other higher-margin devices. Retail stores are important as part of a multi-channel strategy for products that require customers to touch and feel them. Amazon has had an easier time switching to in-store retail than traditional retailers (e.g. Walmart have had developing online).

Amazon Alexa and the Echo is another example of a product they have been able to create and distribute via Amazon’s main retail arm.

Apple has become one of the biggest and most loved brands in the world (and perhaps ever). It’s moved away from its roots as a geek-culture product and is now a modern luxury brand; it signals to others that we are cool, smart and have good taste.

5 traits of a luxury brand

Perhaps Jobs greatest feat was to realise early that Apple’s products would be supported by in-store retail experiences. These have driven huge margin and brand love and now act as huge moats for the business. Whilst brands can build similar products they can’t match the retail experience.

Apple is unique amongst The Four as the only luxury brand.

It is the first platform to reach that scale with a huge knowledge of its users (data).

Science has shown that fostering relationships and community is a factor in creating happiness. So Facebook plays an important role in society in connecting people.

But this also provides it with huge moats, network effects, as the product gets more valuable the more people that are on it. As they add more people they also collect more data.

Zuckerberg has also acquired boldly and aggressively. Buying Instagram for $1bn seemed crazy at the time but it is easily worth 50X that now.

Facebook has become one of the biggest media players (with Google) without incurring and costs of that content (its all user-generated). Could you imagine the value of Disney or Netflix if it has 0 content costs?

Facebook and Google make up a media duopoly that for the first time do not view themselves as a media outlet. This is interesting given the historic role media has played and an ‘arbiter of truth’ and its potential influence in political powers.

Previously, people turned to religion to seek answers about the world, now they turn to Google. We trust Google as much as any brand; asking it questions we wouldn’t ask our partners. Google has been able to increase profits whilst lowering prices to customers. In terms of market share, it is the most dominant of The Four (and is a clear monopoly).

Additionally, it has created Alphabet to take risky bets whilst it’s advertising business continues to grow. 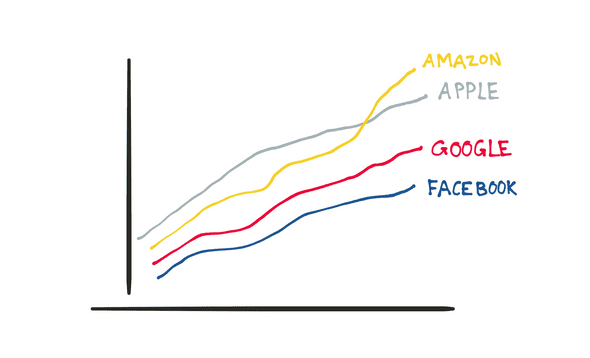 How Have The Four Managed To Get Ahead?

The Four and the body

The Four appeal to our human nature through 3 main areas:

It’s interesting to note that each of these companies had effective entry points before truly appealing to one of these areas. Facebook grew through university networks before wider appeal. Apple started in niche geek culture before becoming a luxury brand. Amazon says it’s going to supplement UPS (but it almost certainly will crush it). Google was just a small cute search engine before it partnered with huge sites like Yahoo!.

But the cycle of innovation can leave The Four vulnerable as well. Talent begins to move back to startups. Size leads to bureaucracy and slower decisions. They become vulnerable to government intervention.

Traits Of The Four

What are the commonalities of The Four as they race toward trillion dollar valuations?

The Four satisfy each of these criteria to different degrees but these commonalities are the lines by which new competitors need to compete.

Which company might emerge to compete with The Four in the race to a trillion dollars?

Huge retailer. Massive home market. Exceptional growth. Uses AI well. But less of an aspirational storyteller and with a weaker brand (than say Amazon). Yet to go into Western markets with any purpose. As a China-based company has some negative connotations of being anti-innovation or of IP theft and so on.

Very vertically integrated. Great brand (both green and cool). Visionary leader who can drive huge access to capital. Pre-buying of cars is also a cheap means of getting credit. But the scale is still relatively small (in comparison to The Four) and not yet penetrated global markets in a significant way.

Global. Acquired lots of capital. Great product. Not vertically integrated. Not that differentiated. Huge potential for regulation. Not very likable.

Huge market. Have lots of physical assets that they could turn into distribution hubs. Have capital. Not likable. Not digital-first.

Global. Growth in cloud products, enterprise and via acquisition of LinkedIn. Little access to capital. Not likable. Not a career accelerant as it used to be.

Tempting to say its similar to Uber but its product is far more differentiated. Good access to capital. Likable (company and founder). Has considerable network effects. Not vertically integrated.

Still a huge tech company and found success in shifting to high margin services. Not a career accelerant. No good access to capital.

They control the lines (in being ONline). High margin and huge revenues. Not global. Not career accelerants.

Facebook has only been around 10 years. It’s possible that another startup could rise up to challenge The Four that isn’t even known yet.

The Four And You (And Your Career)

The rise of The Four has impacted the job market as a whole. What should we consider in this new environment?

The new global market means it better than ever to be exceptional but worse for everyone beneath. The Four will find the exceptional and pay above the odds to get them, but below that becomes tougher. You may only be 10% worse but earn 10x less.

By and large haven’t changed:

It’s more important than ever to have high emotional intelligence and be emotionally mature. The one constant is change - so being able to ride the waves of change whilst remaining enthusiastic, stable, likable, and so on is key. You need to be flexible and adaptable. You need to be curious. You want to take ownership and obsess about the details.

College is still the best signalling system to potential employers. Even if you drop out, the network can be useful. (Granted - it’s not something that everyone can afford. Failing that, get credentials in more niche areas).

You need to become a competitor and learn how to win.

Even in a world of remote opportunities, wealth still accumulates in the super cities of the world. Be in one.

Learn how to get your good work in front of people and be known for your opinions. Social media is a great tool for this.

Wealth is accumulated by having equity in things. Go for equity wherever possible and invest in assets3.

Pick a place for 3-5 years but keep an ear open for interesting conversations. When something is attractive, learn to play companies off of each other.

Be loyal to people, not companies

Keep your boss happy and they will pay you back ten-fold.

If you liked this post, you can sign up to get more book notes via my email.